The digital platform exclusively for TMT M&A and Investment leaders. 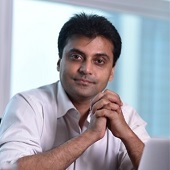 Thivanka is the Founder and Managing Director of a boutique advisory firm specializing in corporate restructuring, business reorganization and capital raise (including series A and Series B funding) in the TMT, energy and ICT space. In a short span since its set up, the firm today includes in its clientele both start ups and SMEs as well as listed corporations across Malaysia, Sri Lanka, Australia and United Kingdom.

Prior to this, Thivanka was CFO of edotco Group, a subsidiary of Axiata Group Berhad and the largest independent regional player in South/South East Asia. As of early 2020, edotco managed a portfolio of ~30,000 towers in 8 footprint countries, with a ranking of 12th largest towerco globally. As pioneer and key member of the Founding Team, Thivanka led the set up of edotco Group including 4 successful market portfolio carve outs and numerous acquisitions since 2014 and steered the Group to its landmark Private Placement of $700m at a then global benchmark valuation. Thivanka also led complex syndicated debt funding in various entities for edotco aggregating over USD1bn.

Thivanka has also held various senior positions throughout his 22 year career with the Axiata Group including Executive Assistant to the President and Group CEO, Vice President of Regional Development and Head of Investor Relations, driving the operational performance and strategic initiatives of the Group. He was also Group Chief Commercial Officer at Dialog Axiata in Sri Lanka; with significant achievements that included leading Dialog's IPO which became the largest in the history of Sri Lanka, and securing 3-year consecutive wins of the GSMA awards for the Group.

Thivanka holds a MBA from the University of Western Sydney, Australia and is a Fellow of CIMA [FCMA/CGMA], Fellow [FCPA] of CPA Australia and a Member of the institute of accountants Malaysia as well as Member of the IMSL. He is also an Alumni of INSEAD and a well-sought after speaker in the TMT and Finance industries.